Rent the article at a discount

* Final gross prices may vary according to local VAT.

Calcitonin receptor-immunoreactive (CTR-ir) endothelial and foam cells were identified in atherosclerotic plaque within the abdominal and thoracic aortas of rabbits fed a cholesterol-supplemented diet. Initially, cells within the endothelial layers of nascent atherosclerotic plaque of arteries were also CD34-positive, a marker of precursor cells of the haematopoietic lineage. In a further rabbit model with more advanced cardiovascular disease, CTR-ir cells were located deeper within the plaque as well as within the endothelial layer overlying the neo-intima. Finally, in the third model, in which the 4-week period on the atherogenic diet was followed by a 12-week period of regression on a normal chow diet, during which serum cholesterol levels returned to the normal range, CTR-ir was markedly reduced in the stabilized fibrous cap of plaque. Thus, the expression of CTR is associated with the early cellular events involved in plaque formation and is down-regulated as stabilisation of plaque progresses in the process of healing. 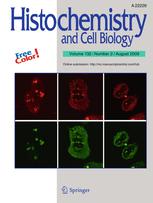